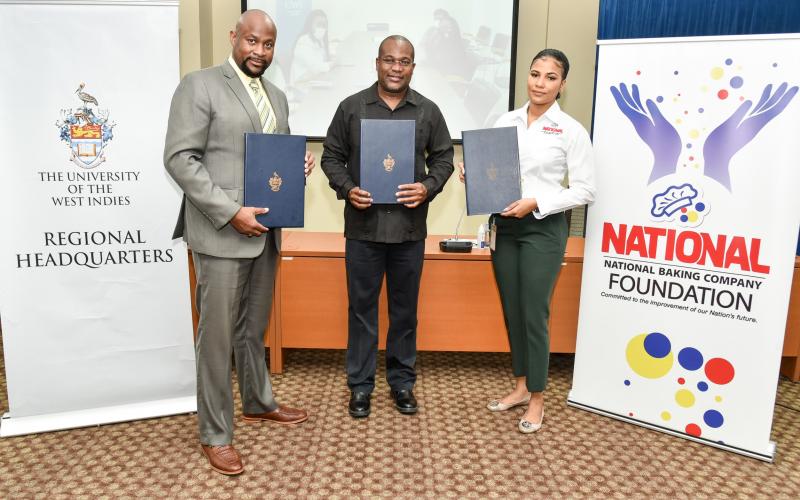 The UWI Five Islands Campus, Antigua and Barbuda. Tuesday, March 8, 2022. — On Monday, March 7, The University of the West Indies (The UWI) and the National Baking Company Foundation in Jamaica signed a contract  to provide  funding towards the establishment of a Centre of Excellence for Oceanography and Blue Economy (COBE).

Speaking at the grant  signing ceremony held at The UWI’s Regional Headquarters in Jamaica, Vice-Chancellor Professor Sir Hilary Beckles applauded the National Baking Company and its founder Gary “Butch” Hendrickson for the support of the University. He noted that partnerships like this one fit into The UWI’s strategic plan to bring alignment to industry and academia. Vice-Chancellor Beckles also noted that partnership is particularly important to implement the development of the marine and blue economy, which is critical to the future of the region.

Principal of The UWI Five Islands Campus, Professor Densil A. Williams, noted that the Centre of Excellence for Oceanography and Blue Economy will be a game-changer in the diversification of the economic sectors of the region as the Caribbean looks for new areas  to  transform their eeonomies. . “It is important to note that the Centre will be at the forefront of leading research and innovation on all issues related to the Blue economy so that we can find new avenues for wealth generation using our vast ocean resources in the Caribbean,” he explained. He also lauded Mr. Gary ‘Butch’ Hendrickson for extending his philanthropy to the wider Caribbean with this gift to The UWI and the impact in shaping minds and innovative activities at the Five Islands Campus.

Director of the National Baking Company Foundation, Craig Hendrickson, who delivered a virtual address at the signing, reaffirmed his organisation’s commitment to the Centre saying, “It brings us pride at National Baking Company Foundation to support the launch and early initiatives of the Centre of Excellence for Oceanography and Blue Economy at The UWI Five Islands Campus.” He commented that climate change affects all the islands of the Caribbean and will have implications for business—whether small businesses or large corporations, all of whom are users of the ocean in one way or another.

Minister of Social Transformation and the Blue Economy of Antigua and Barbuda, the Honourable Dean Jonas, endorsed the partnership between The UWI and the National Baking Company Foundation. Minister Jonas, who heads the International Steering Committee for the Centre, also pledged his government’s continued support for operations, noting that the Centre will bring crucial research and diversify the economies across the region, especially in a post-COVID era, through the use of ocean resources.

The concept for the establishment of the Centre of Excellence for Oceanography and Blue Economy came about through a Memorandum of Understanding (MoU) among the Government of Antigua and Barbuda, the Association of Commonwealth Universities, the Commonwealth Secretariat and its other agencies such as CEFAS and CWEIC and The UWI which was signed in January 2021. The Centre will be located at The UWI Five Islands Campus, and the grant of USD 130,000 will be used in setting up the Centre, scheduled to open on August 1.

Note to the Editor

Photo Caption: The UWI’s University Registrar, Dr. Maurice Smith (left), Principal of The UWI Five Islands Campus Professor Densil A. Williams (centre) and Ms. Lori Anne Samuels, Executive Director of the National Baking Company Foundation (right) following the signing of the MoU which will see the Foundation giving USD 130,000 to The UWI Centre of Excellence for Oceanography and Blue Economy.

MoU signed between Government of Antigua and Barbuda, The UWI and Association of Commonwealth Universities