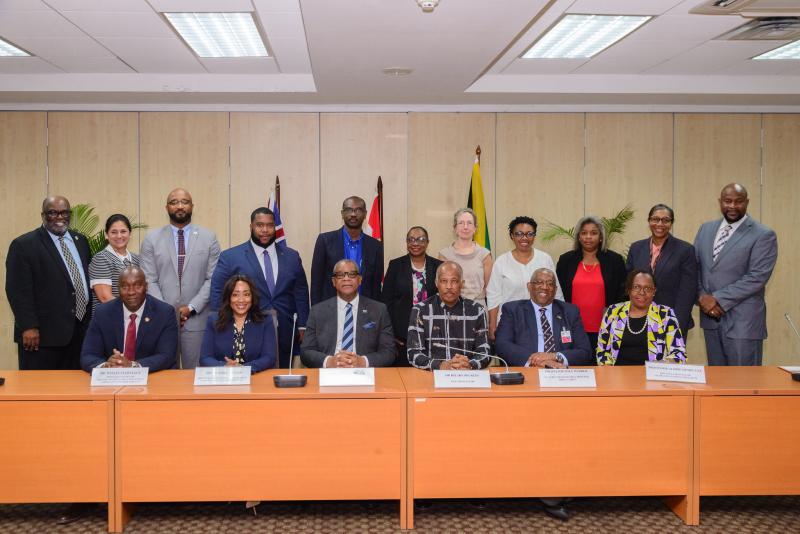 Front row centre: The Honourable Charles Washington Misick, Premier of the Turks and Caicos Islands (L) and Professor Sir Hilary Beckles, Vice-Chancellor, The University of the West Indies (R) together with their delegations.

The UWI Regional Headquarters, Jamaica W.I. Friday, 19 August 2022—The Government of the Turks and Caicos Islands (TCI) is in the process of reforming its national education and labour sectors to build the human capacity of its people and has turned to The University of the West Indies (The UWI) to strengthen its relationship with the regional academy.

On Monday, August 15, The Honourable Charles Washington Misick, Premier of the Turks and Caicos Islands, and a team comprising the Hon. Rachel Taylor, Minister of Education, Employment, Labour and Customer Service; Wesley Clerveaux, Permanent Secretary, Ministry of Education, Employment, Labour and Customer Services, and other government officials visited The UWI’s Regional Headquarters in Jamaica and met with Vice-Chancellor, Professor Sir Hilary Beckles and members of the University’s Executive Management Team to advance discussions on the areas articulated. Vice-Chancellor Beckles and Premier Misick share a mutual desire to foster access to and growth of education in the region and agree on the critical role of The UWI in this regard.

Prioritised on the agenda for the dialogue was partnership on efforts to improve access and efficiency in learning within the TCI education sector. Discussions focused on further strengthening The UWI’s cooperation with the TCI in the short, medium, and long term towards building the human capacity among the Islands’ citizens. Specifically, these talks centred on collaboration with the University Hospital of the West Indies to facilitate nursing programmes for students from the TCIC including internship placements and housing accommodation, as well as joint degree programmes in areas like primary and secondary education, business studies, and social work.

The TCI Government also signalled its interest in the Turks and Caicos Island Community College advancing its partnership with The UWI. Premier Misick stated, “I am indeed grateful for the opportunity to sit with the executive of UWI’s Mona Campus and Vice-Chancellor Beckles. The Turks and Caicos has and will continue to enjoy a fruitful relationship with the University and I am hopeful of their partnership in helping our country build the human capital capacity needed for our further development.”

Commenting on the visit, Vice-Chancellor Beckles remarked, “It was a pleasure to discuss with Premier Misick and his delegation, the important role that The UWI has to play in realising the vision of his Government in enabling and empowering the people of the Turks and Caicos Islands in achieving their development aspirations. The Premier and I are in complete agreement about the importance of quality and relevant education to the region. The UWI looks forward to forging an even closer collaboration with the Turks and Caicos Islands going forward.”

The visit of the TCI Government delegation significantly builds on a deepening relationship with The UWI. In April this year, the Government hosted the Meetings of the University’s Technical Advisory Committees (TACs) to review its annual budgets, and in 2018, The UWI Open Campus partnered with the TCI Government to re-establish a physical campus site on the Islands.